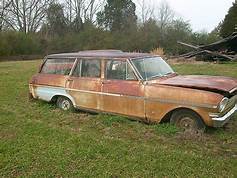 The very first time I went on a blind date it was disastrous. (For me, not for her) I’ll call her Shelly. We started emailing a few times, then talked on the phone twice, then she said: “Let’s meet.” Is that a blind date? I dunno. I call it that because I had never met her and had no idea what she looked like.

Shelly was a recent widow, had no kids and said she was a saved Christian, although she hadn’t been to church in years. She was married briefly when her husband suddenly up and died from some mysterious illness. Among her many hobbies were breeding and selling parrots, playing poker and going to a different library every week. I got the impression that she was an intelligent bookworm who secretly liked a naughty game of cards every now and again. She suggested we meet at her favorite fast food joint. I was to look for an old station wagon with a lot of bumper stickers and peace signs. When I pulled into the parking lot, I had no trouble spotting the rusty clunker. It was filled with so much stuff, that I feared Shelly was either homeless and living in her car or she was a hoarder. She slowly got out from somewhere inside this massive pile of clothing and trash. When she finally stood up and turned to face me, my jaw dropped. Shelly was extremely tall and on the heavy side. But the worst part was she was dressed like a farmer in blue denim overalls and a straw hat. (I almost expected to hear her shout: “Howdee!” with a piece of hay dangling between her teeth) Her brown frizzy hair was tied in a long ponytail. As she got closer to me, my tongue must have done some weird gymnastics as I tried to get my mouth to work. She gave me her hand, flashing a very wide grin, which revealed two missing front teeth. This woman was nearly old enough to be my mother! Gasp! Help! Run!

After I finished my burger and fries. I came up with an excuse that I needed to be elsewhere and made my exit. That night Shelly sent me a long, mushy email. She wanted to see me again and asked if I could meet her at the library in the next town. She said she would wait for me in the vestibule, dressed in black slacks and a flowery blouse. I turned her down as gently as I could. She was disappointed, but said she would manage to live somehow.

Later I learned that she didn’t frequent libraries for the purpose of reading books or to borrow videos. Nor did she go to use the computer. It was solely to pick up men. No wonder I have this morbid fear of libraries!

3 thoughts on “Beware Of Older Ladies In The Library”

This site uses Akismet to reduce spam. Learn how your comment data is processed.

This site is for the glory of God.

Notes From A Retired Preacher

A Grace Oasis; a fellowship of believers in eternal salvation by Grace alone through faith alone in Christ alone.

Time spent with the Lord in His Word!